For many Illinois residents, President Joe Biden’s plan to cancel $10,000 of federal student loan debt for low- to middle-income borrowers and double that for Pell Grant recipients is a game changer. According to educationdata.org, 1.6 million student borrowers live in Illinois with an average student loan debt of $37,757. Forgiving part of or all their debt will allow them to save more and use the savings to potentially invest in housing, transportation, or other household needs.

Yet, underlying the student debt is the issue of college affordability. The same site lists Illinois as having the fourth highest average cost of in-state tuition and fees for attendance at a public 4-year institution among U.S. states and the District of Columbia.

As with other states, Illinois decreased its proportion of state funding for the operation of state universities over the years and relied more on tuition. According to the Illinois Board of Higher Education (IBHE), state appropriations on average covered 72% of public university costs vs. 28% from tuition and fees in state Fiscal Year 2002 (FY02)*. By FY20, the state covered just 35.6% of costs vs. 64.4% from tuition and fees. 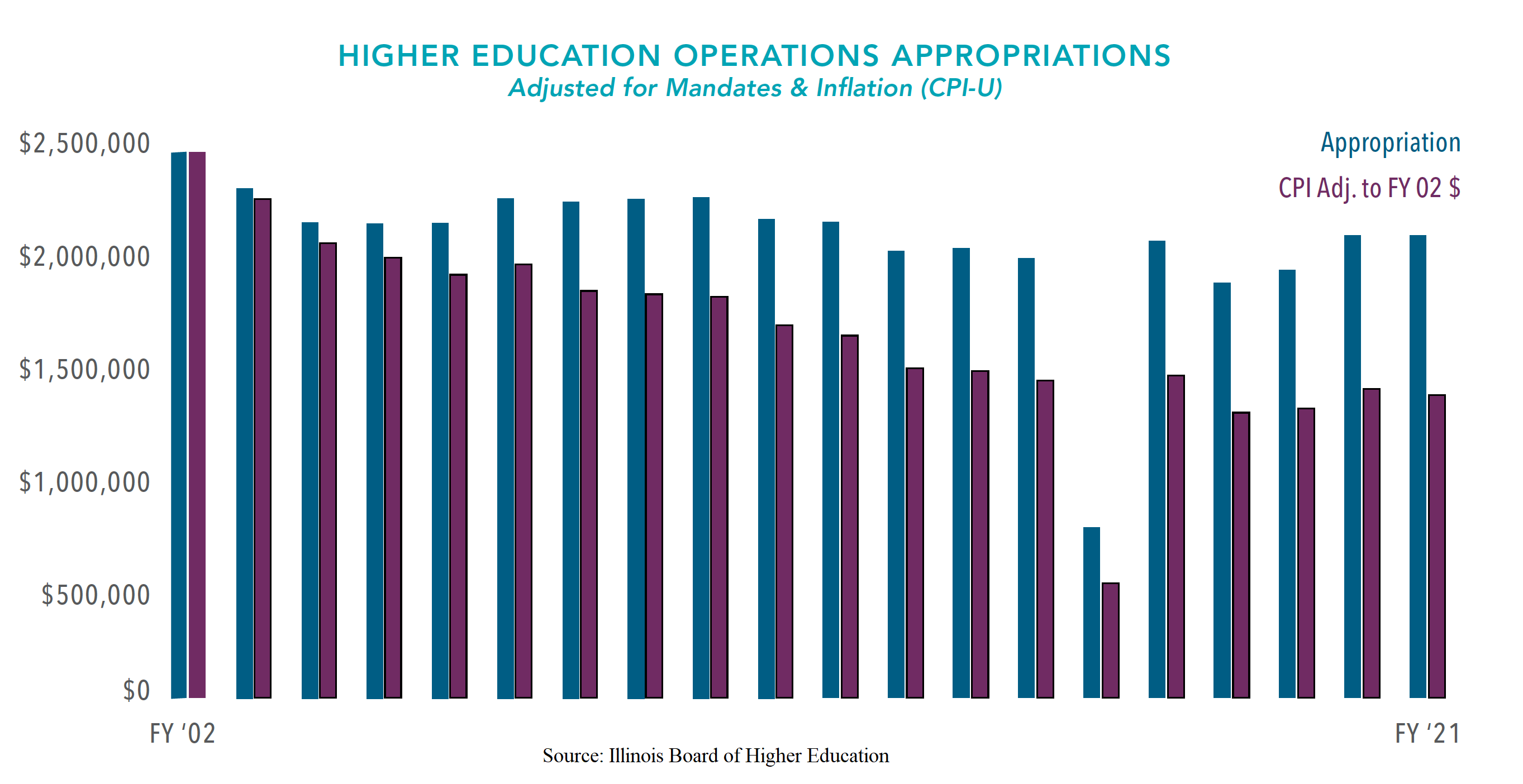 The estimated total cost of attendance (tuition and fees plus living expenses) for an in-state student at a four-year public university in Illinois was just under $30,000 during FY20. According to IBHE, a low-income student receiving the maximum Monetary Assistance Program grant**, Pell grant, Federal Work Study, and Direct Federal Student loans, without additional scholarships, loans, wages, or family resources, would be $12,000 short in being able to pay for the full cost of attendance at a public university.

Since FY20, the state has increased university funding and provided a significant appropriations boost to the Monetary Assistance Program. There are also several tuition waiver programs at Illinois universities. Still, with family income lost during the pandemic and inflation increasing other household expenses, meeting the financial requirements for attendance at an Illinois university is a challenge for many state residents – often Hispanic, Latino, or African-American residents.

We can do better. Over the years, other states have offered tuition and financial incentives that make it more attractive for many Illinois residents to attend college out of state. Frequently, those students take the skills and knowledge learned at those institutions and apply them to out-of-state companies.

So while many families will see relief from the federal loan forgiveness measure just announced, let’s consider that relief a respite while we keep boosting our investments in Illinois universities and colleges to increase affordability and opportunities.

*A state fiscal year runs from July 1 of the prior year to June 30 of the named year.
**State MAP grants, which do not need to be repaid, are available to eligible Illinois residents who attend approved Illinois colleges and demonstrate financial need (Illinois Student Assistance Commission).

Want to join the discussion?
Feel free to contribute!

Help Us Advocate for our Children

Get news and events directly to your inbox.

Children’s Advocates for Change is a proud member of the Economic Analysis and Research Network.

Notice of Non-Affiliation:
Children’s Advocates for Change is not affiliated, associated, authorized, endorsed by, or in any way connected with Voices for Illinois Children (“Voices”). Voices is an independent advocacy organization that is powered by YWCA Metropolitan Chicago.